Imagine you, at 6 years old, walking into your first day of school. Your teacher starts with math. She hands out a graphing calculator to each student, then starts reciting instructions for how to solve integrals. Then she gives each child a sheet of integrals, and instructs them to follow her instructions, typing in each equation, pressing "solve", and transcribing the answers.

One concerned parent asks, "These kids can barely count! Shouldn't we start with, you know, addition, or something?" The teacher replies, "It's 2022. Addition was invented thousands of years ago. No one even adds numbers by hand anymore. It's all calculus and calculators. It's simply more effecient to learn to use right tools. Don't you want your kids to be competitive in the workforce?"

I know it sounds absurd, but this is a trap many developing countries fall into. They try to leap ahead, importing fancy machinery to operate, without understanding the machine they're using. So, like the child who is taught to blindly plug equations into a graphing calculator, manufacturers in developing countries can copy and run fixed processes, but have no room for real innovation, because how can you improve on a process you don't understand?

The child who only knows how to copy equations has one, extremely replaceable skill: pressing buttons he's told to press. This is a completely replaceable role. Also, the final productivity of the child has nothing to do with his own skill or intelligence, and everything to do with the power of the calculator given to him. If you give him a powerful calculator, and tell him to press the right buttons, he might be useful. But if you don't have access to a powerful calculator, and you give him a cheap 4-function calculator, he suddenly can't do anything useful.

Developing countries need not reject globally available knowledge and assistance, but must start with what they understand fully, and apply their own sensibilities, taking things apart and building back better. How else does one learn?

In his visits to various factories across India, Sridhar observed that many industrialists don't understand the machinery they operate. A common pattern was for a factory manager to import expensive equipment from China, Germany, or Switzerland. Their whole business is then based on operating these complex machines that they don't understand. The imported equipment is often over-engineered for their purposes (imagine buying a GPU-driven super-computer with thousands of options for configuration, only to use it to check your email (though if you use chrome it may be necessary...)). And, if a part breaks, they're reliant on these foreign countries for technicians and replacement parts, who, because they have total leverage, can charge inflated prices.

In the lever-pulling business model, operating machinery you don't fully understand is the core of the business. There's no room for innovation, because you don't understand the machines enough to improve them.

This is an extremely fragile business model. Lever-pulling is wholly dependent on three factors for its survival:

The first factor is fragile to technological innovation, which, as we've established, is totally outside of the lever-puller's control. Every day they must wake up and pray that Switzerland does not automate them out of existence.

Erik Reinert, in his Visionary Realism of German Economics, provides an excellent example of this:

Soon after this setup was established, the US adopted laser-driven fabric cutting technology. This new tech didn't require nearly as much manual labor as the old tech, so the low fabric-cutter wages in the DR no longer mattered. US companies reshored the operation back to the US, basically automating the DR fabric cutters out of a job.

The second factor, "Access to cheap labor", is fragile to national growth. Imagine a lever-pulling business making screws and nailclippers. A screw is a screw--- there's not much room for branding and differentiation when it comes to a screw. Marketing is much less important in manufacturing equipment, where criteria is objective ("I need 100 flat head wood screws, 1 inch each"), than in services, where the criteria is much more subjective ("I need an honest investment bank with helpful customer support"). It's largely based on technical requirements. So, there's really no way to differentiate two screw making companies who pull levers on machines of a similar quality. The only way to compete is on price, and since you can't reduce price through innovation, you'd need to cut costs by paying low rent and low salaries.

But, if the Indian economy improves, standards of living will improve, and rent and wages will go up. This means losing your competitive edge to lower wage countries, who can export, to your customers, the same products at a cheaper cost.

I hope every industrialist would WANT national growth, despite the conflicting interest. Regardless, in India's case, it's inevitable. Therefore, it's unwise to rely on profiting from low (globally relative) wages in the long term.

The third factor limits growth. Your shipment costs cannot exceed the gains of your wage-arbitrage, so you're sort of stuck to selling locally. Again, we need to think about competitors that have access to the same machines. For products like screws or compressed air, that just need to satisfy some technical requirement, decisions largely come down to cost and technical reliability.

What costs can you cut aside from rent and labor? Shipping and supply chain. So the majority of one's success is dependent on global factors, far outside their control.

Of course, lever-pulling has some advantages. It can be a good short-term strategy for developing countries to quickly absorb unemployment and boost productivity, and to kickstart import substitution. It need not be discarded altogether, but should be taken as a starting point, not a steady-state.

How does a country graduate from lever-pulling?

We may find inspiration for this in South Korea. From 1960 to 2010, South Korea ran a dramatic fifty-year ascent from impoverished third world country, to one of the strongest economies in the world. South Korea, during its catch-up, had many opportunities to become lever-pullers for their more advanced neighbors, like Japan, but Korea's leaders forced industrialists to take the harder path: Only import machines to take them apart and learn from them. Then, build your own, and improve what you make.

Pohang Iron and Steel Co (POSCO), was the first major steel producer in Korea. They were founded in 1968. Ten years later, still getting their bearings, POSCO was looking at ways to mill and shape their steel. They approached some Japanese consultants who recommended them fancy, state-of-the-art, computerized mills, but POSCO rejected the new technology in favor of the classic, manually calibrated, hot rolling steel mill, because they didn't want to use something they couldn't yet fully understand. (see How Asia Works by Joe Studwell, p. 140)

They only adopted (and studied) the computer controlled machines when they were ready. And now, forty years later, POSCO is one of the largest steel-makers in the world, and the most profitable, with their own state-of-the-art, highly automated, manufacturing process. They studied the innovation available to them, without becoming dependent on the innovators themselves.

The long-term plan is to move from pulling levers on machines, to making the machines themselves. At first, the machines may be uncompetitive, and difficult to sell, but just by virtue of the building process, it is inevitable that a team engineers will notice opportunities for innovation and refinement. Each upgrade creates value. It's no longer a zero-sum game where you're competing on the factors I listed earlier. There is room for real growth.

I could only find one Indian company that excels in making machine tools: ACE micromatics. By excel, I mean making globally competitive goods-- quality enough to export to first world markets.

ACE micromatics is proof that high quality Indian machine tools are possible. Therefore, competitive Indian capital goods just a matter of resources and initiative. Of course, the government can step forward, and it looks like they are (but of course there will always be corruption). But, any group of motivated mechanical engineers can hear the story of ACE micromatics and attempt a similar operation without assistance.

You could start even simpler. Looking at India's raw import data, I saw people are importing hundreds of these low-end rice milling machines. 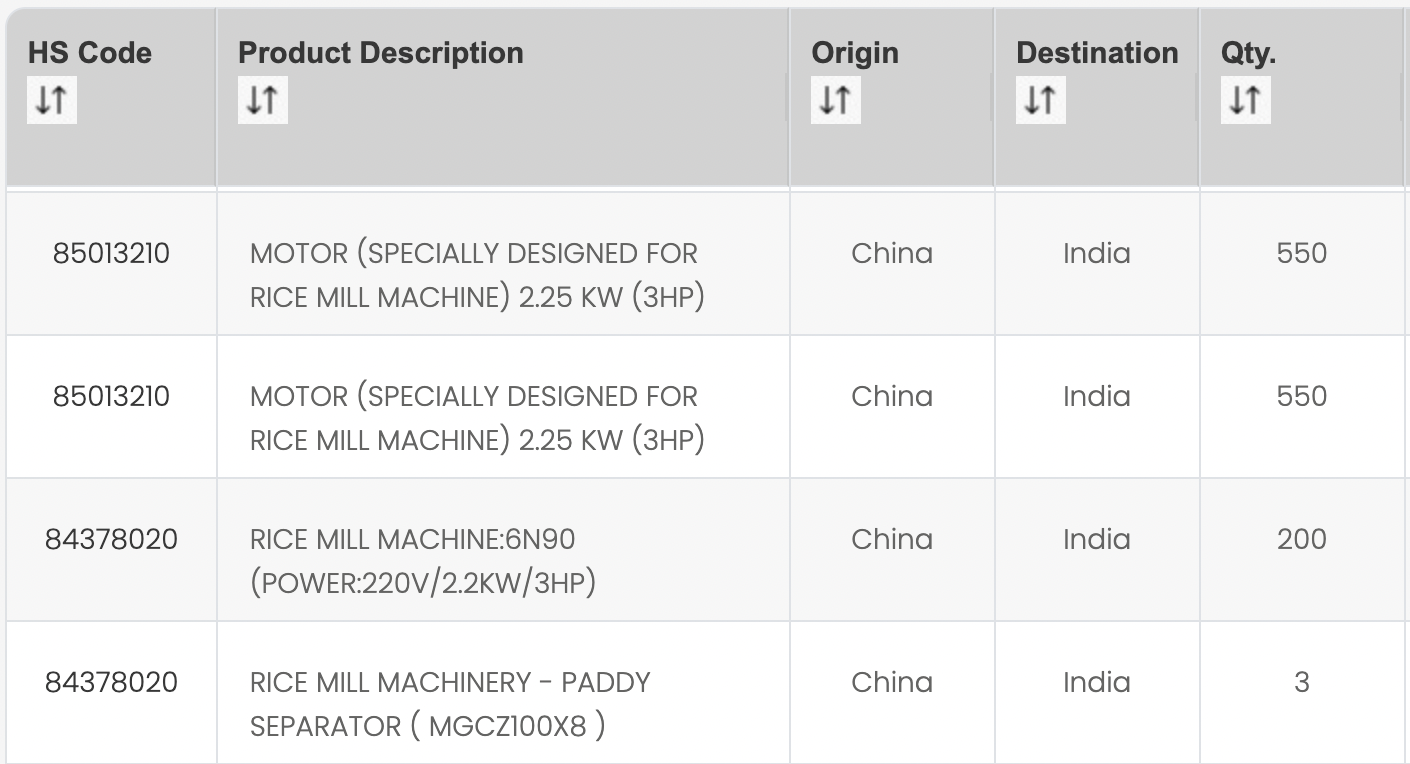 The machines squeeze unpolished rice through two rubber wheels, set a rice grain distance apart. The wheels spin at different speeds so when the rice is squeezed through the hull is ripped off. This is an example of a cheap capital good, with an existing Indian market, that can be produced in India, for a company to start developing engineering know-how.

The machines are only $350 each, so I'd guess shipping costs are a large fraction of profits. Therefore, selling locally gives an immediate advantage, which one can re-invest to make better and better machines.