There isn't much to do in Cupertino, so Norman, Kane, and I bought two of these inflatable rafts.

If you're considering buying one of these babies yourself, please note that the people in the Amazon photos are probably missing the lower half of their legs. If you want to put two average sized people in an Intex Challenger 2, you will much cozier than the picture puts on.

Once we had the rafts, we needed a location. No longer restricted by boat rental services and docks, we could go anywhere-- raft anything. Invigorated by this newfound freedom, we opened up Google Maps and scrolled around, searching for interesting patches of blue. We weren't just going to lounge around a lake drinking beers and talking (which, in retrospect, is probably the main use case of these rafts). We were Lewis and Clark, about to conquer unchartered, dangerous, land in the Challenger 2. 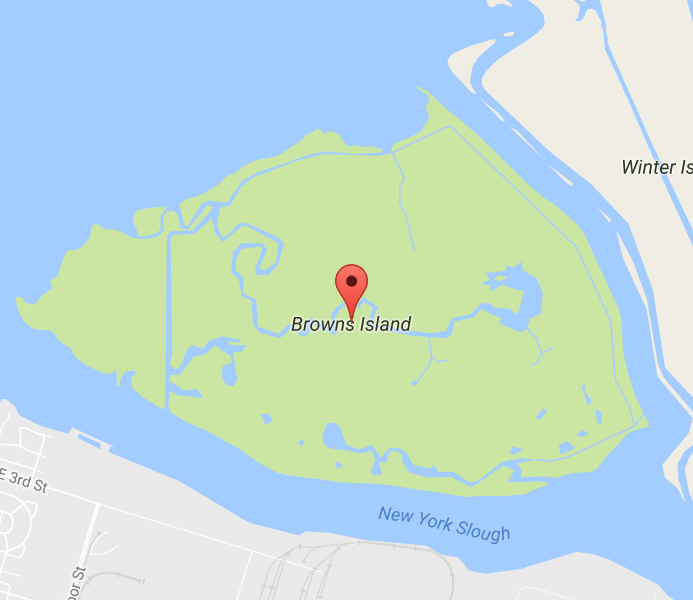 The first obstacle with unauthorized rafting is figuring out where to launch from. After a few minutes of lackluster surveillance, we chose to believe that all the easy access points to the New York Slough were gated by a private dock. Advanced maneuvering was required. After driving around for a bit and climbing over a few rocks, we ended up here. 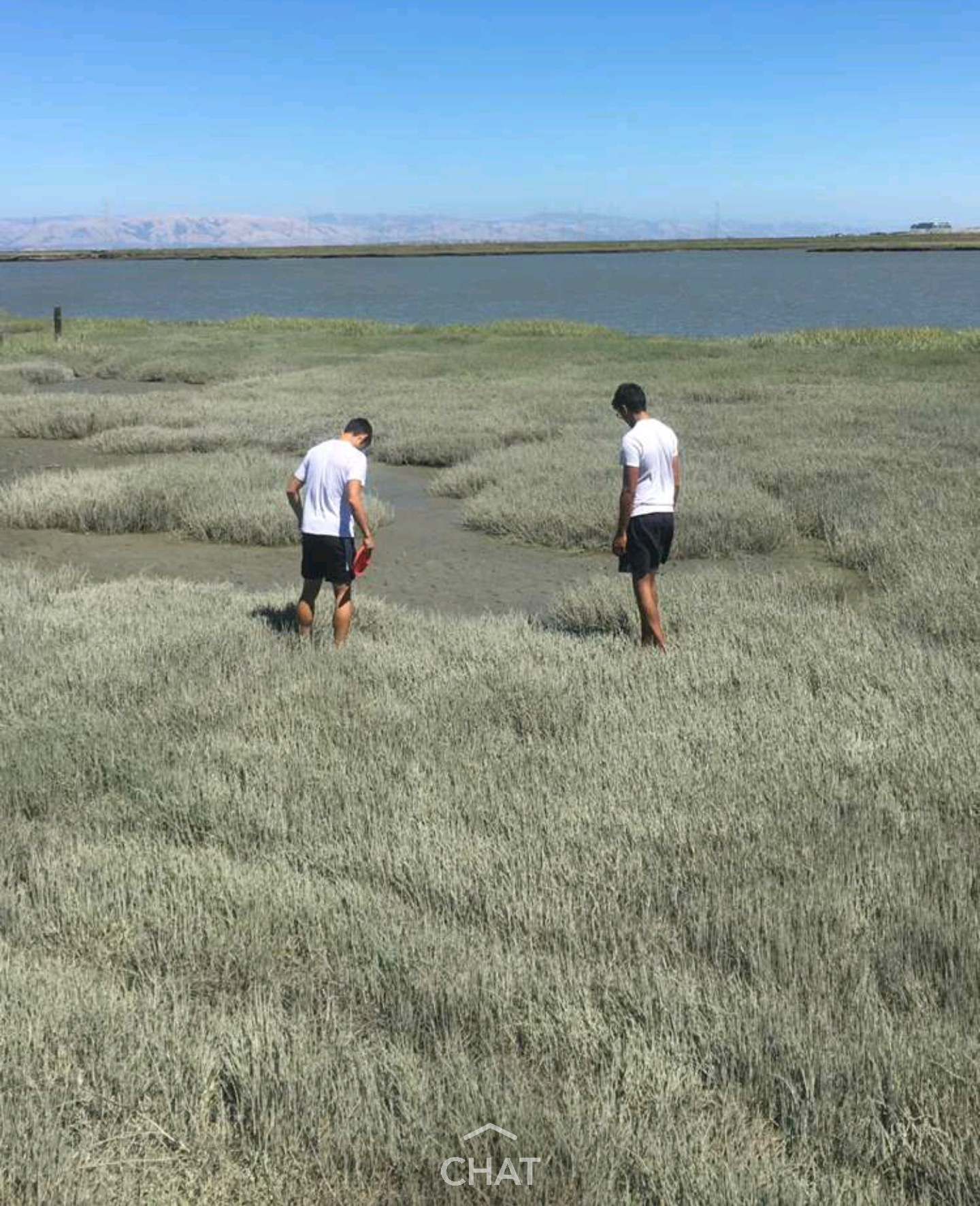 After thoroughly fucking up our shoes, we trekked out far enough to gauge the water speed. There was a steady, strong, current. We looked at the current, imagined us in the current with our budget, toy, rafts and malleable oars, considered our utter lack of boating experience, and trudged back to the car. With fading morale, we decide to cut our losses and just head to Lake Merritt in Oakland, a steep downgrade from rafting through a random Slough to some island. It was a cop out, but at that point we just wanted to be in the water. Adventure would wait. 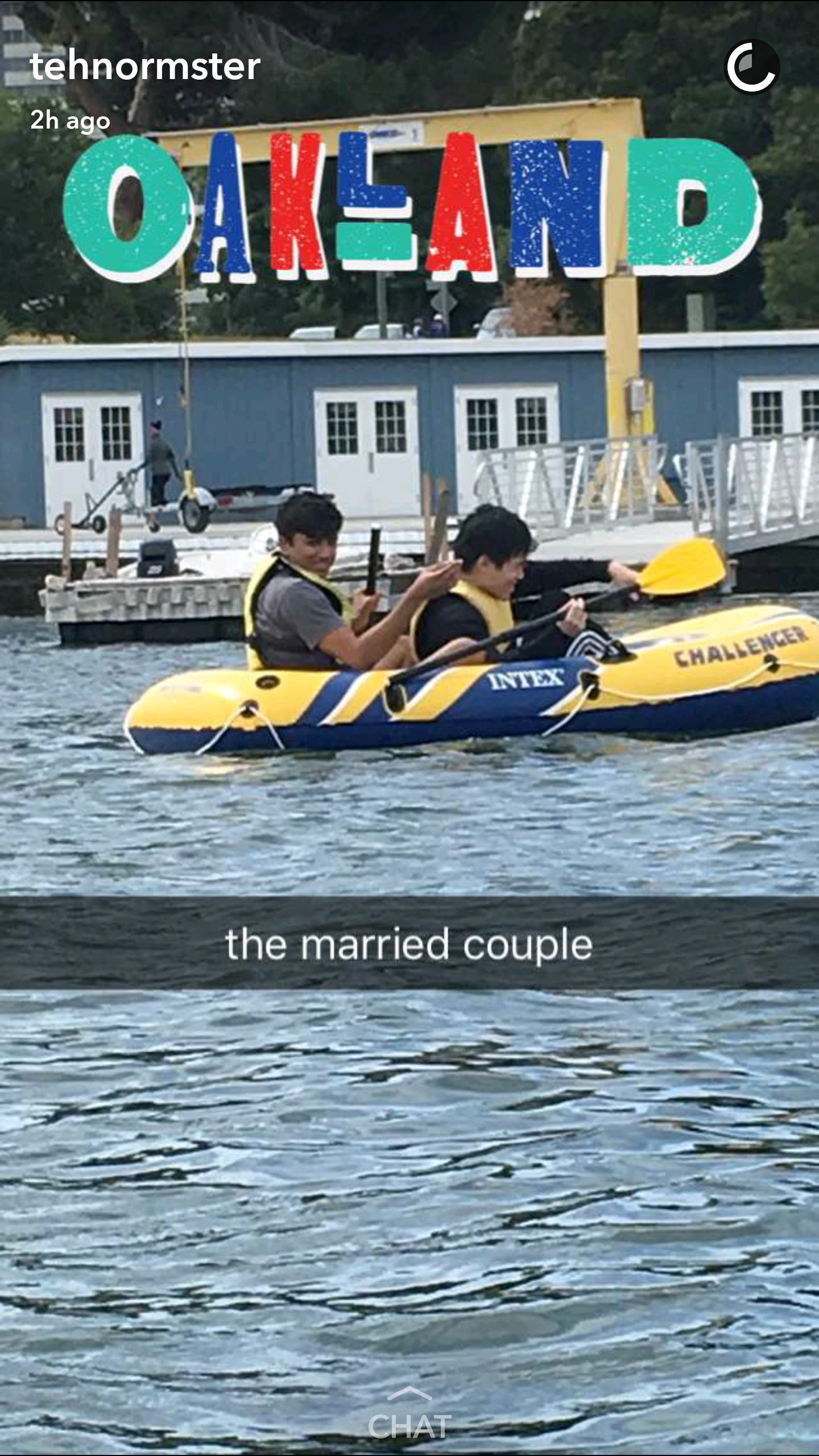 Lake Merritt is intended for boating. By virtue of this fact, I believed rafting there would be kindergarten shit. We soon realized, however, that incompetence can turn even the calmest of waters into class VI rapids.

Right after launching, Kane and I slapped at the water with our oars, continuously spinning in circles. We took 15 minutes to leave the 100 sq ft. starting area. Thirty minutes in, with 0 net distance gained, we decided that rafting in even the most trivial current was much harder than anticipated. The idea of surrendering to the water, veging out, and drifting down the lake replaced my viking fantasies. And so Kane and Norman took out their phones and tried to synchronize the playback of the then just released Chance mixtape, Coloring Book, in a meek, distributed, boombox, and we let the current do its thing.

This summer I've come to love being on the water. Drifting down an open blue lake under a clear sky, basking in the bright, summer, day was fabulously pleasant.

Until we drifted all the way across the lake and straight into a pool of heavy moss. 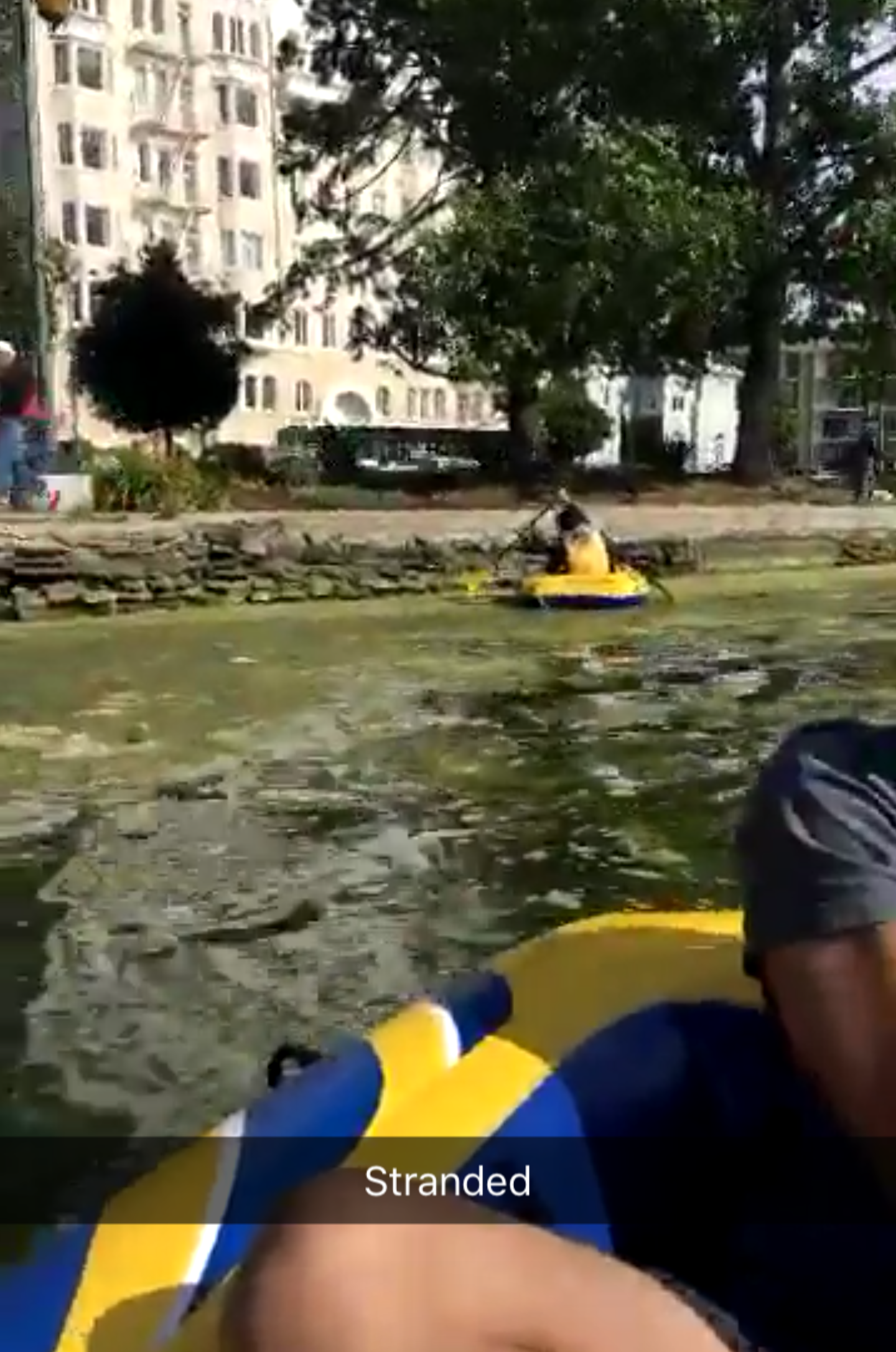 Lake Merritt gets crowded on summer Saturdays. Right next to the bustling sidewalk perimeter was the most embarassing spot to get stuck in our piss colored Challenger 2's. We ended up on quite a few snapchat stories. I expected some helpful advice from the onlooking Oakland denizens, hoping this was a normal problem for casual boaters, but apparently rafting into moss is a rare predicament. As we were contemplating how fucked we were, we heard a faint "Y'ALL ARE SO FUCKED!" from a rollerblader scooting by, which helped us precisely determine the fuckedness of our situation. Our hysterical laughter rendered us unable to move, and we drifted further into the moss.

Each raft came up with their own solution. Norman and David, the more competent rafters, fought through the moss, clawing at and scooping it aside with their paddles until they could climb onto the shore. They carried their moss soaked rafts overhead through two miles of strange looks and drunken jeering ("The lake is right there what are you doing?!"). Kane and I, not willing to embark on this walk of shame, decided to raft against the current, all the way back to the shore. Through the lakeside binoculars, David and Norman watched us spin in circles, unable to make progress. All of us knew we would never make it back home.

Hysterical strength is the phenomenon of humans exhibiting superhuman strength in life or death situations. Fighting the current with our now bending oars to avoid abandoning our rafts, swimming through the rancid moss, and climbing back onto shore in front of all those belligerent people was one of life or death. Kind of. It would've been hella embarrasing at the very least.

Whatever magical endorphins are responsible for hysterical strength turned us into a perfectly in sync rowing machine. Hands chafing, crying obscenities, we skated across the water in our majestic Challenger 2. Each time we stopped, the current pushed us away from land, and so we did not stop. In that 30 minute sprint, my life unfolded in front of me, each major decision leading up to this moment materializing above the water. As we approached the absolute limits of human exertion, we began to throw articles of clothing overboard as jetsam. Though I often reminisce about my fresh navy blue Roshes floating somewhere in Lake Merrit, I know it was the right decision, as a few grueling minutes later, we reached land.

Butt naked, tears welling in our eyes, we embraced the beautiful pavement, kissing it like a lover just returning from war. Though a triumphant celebration in our own minds, the spectacle horrified the nearby families expecting a pleasant day on the lake. And so, we collected ourselves, washed the moss from our rafts, and packed them up for another day.